133 PHOTOS IN THIS SECTION BY GERTRUDE QUINN 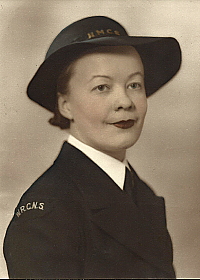 Many thanks to Barbara (Good) Gateley for this collection of photographs belonging to her mother. Barbara writes in part: " Gertrude Alice (Quinn) Good joined the Women's Royal Canadian Naval Service in September 1942. She trained in Galt, Ontario, Esquimalt, B.C. and Halifax, N.S. She worked mainly in Ottawa and was stationed at Kingsmill House. In the course of her duties, she met Franklin D. Roosevelt, Mme Chiang-Kai-Chek and Princess Alice who was the wife of the wartime Governor-General to Canada. Gertrude mostly known as "Trudy" by her mates, was demobilized in January 1946 whereupon she returned home to Bathurst, N.B.

" In August 1947 she married Gordon Franklin Good, who had served for six years overseas in the Carleton and York Regiment from New Brunswick. They participated in many battles, including the Battle of Ortona, breaking the Nazi stronghold in the east. Gordon died in 1981 and Gertrude died in 1985. " Section revised December 23, 2017.

WRCNS Training, Galt & Preston, 1943. Nine photos of HMCS Conestoga in Galt as well as the Preston Springs Hotel barracks. Several photos of Gertrude Quinn and her friends, so far unident­i­fied.

Garden Party For Princess Alice, 1943. Nine photos. Princess Alice, Countess of Athlone, was the wife of the Governor-General, and Honorary Com­mand­ant of the WRCNS. Surnames: Dawson, Isherwood and J.E. Stanley Lewis, Mayor of Ottawa.

Kingsmill House, Ottawa, 1943. Five photos. Gertrude Quinn was stationed there during the war.

President Roosevelt's Visit to Ottawa. Nine photos. President Roosevelt and the Governor-General in an open car on Parliament Hill. Includes three photos of WRCNS marching in Ottawa, but might be a different occasion.

Male Friends. 18 photos. Gertrude's male friends seemed to be all "lower deck" except for one man with a strange hat badge which may be a party costume. Only a few are identified. Surnames so far: Anderson, Humphries, Jones, Mack, Malone, Warren.

Back Home in Bathurst, NB. Seven photos of Gertrude & Mary Quinn at home. Including one of their brother George Quinn who served in the Air Force during the war, and Stella Marie Thibodeau, also in the WRCNS. Revised Dec. 23, 2017.

BACK TO MAIN MENU